Jerry Figgiani, 8th dan, is the President and Founder of Shorin Ryu Karatedo International.  He comes from a strong lineage of Matsubayashi Shorin Ryu  practitioners who have followed the footsteps of Shoshin Nagamine.  He has been training in karate since 1977 and has been teaching for over 25 years.  Through his extensive background and training in the martial arts, he has developed a unique way of bringing the kata to life.  He is a sought-after seminar instructor who has the ability to enable students to understand not only the kata, but the function and application, thus making his seminars universal to any system.

Sensei Figgiani has trained with Grandmaster Nagamine and in 1991 was a participant in the demonstration ceremony for his 85th birthday and the 55th anniversary of the Nagamine Dojo.  At that time he traveled with his Sensei, Joseph Carbonara, who was a world delegate for the World Matsubayashi Karate Federation.

Sensei Figgiani was the subject of featured articles in the New York Times, Newsday, and most recently Masters Magazine.   In addition, he is also a published author.  His work has been published in Karate Masters Volume IV, and in 2013, he was given his own column in Masters Magazine.   His articles have included interviews with Sensei Joseph Carbonara, Sensei Kensei Taba, Sensei Terry Maccarrone, Sensei Ernie Ferrara, and Hanshi Patrick McCarthy. In 2015, Sensei Figgiani published a book titled From the Minds of the Masters: The Inside Thoughts, Tips & Techniques from Modern Karate-Do’s Best and Brightest. This book collects and builds upon many of his columns and interviews, and it introduces readers to his own martial arts journey while establishing a foundation for his own thinking about the nature, heart, and value of Matsubaysashi Shorin Ryu.

In 2009, Sensei Figgiani organized a “friendship” tour bringing a group of instructors and students from his organization, Shorin Ryu Karatedo International,  to Tokyo, Japan and Okinawa.  The purpose of this trip was to provide an opportunity to study the culture, history, and traditions of the martial arts.  Because of Sensei Figgiani’s background in Judo and his membership in the Kodokan Institute located in Tokyo, Japan, his students were able to attend training at the Kodokan as well.   When Sensei Figgiani and his students traveled to Okinawa, he was invited by Grandmaster Kensei Taba, 10th dan, to be part of the World Championship Ceremonies.  Grandmaster Taba also provided special training during the course of Sensei Figgiani’s stay in Okinawa.

In 2003, Sensei Figgiani created a program along with the help of Assistant Principal Chuck Morea from Longwood High School and Police Athletic League Coordinator Don Yorie to develop a program that would improve academic achievement through the study of martial arts.  R.E.A.C.H. (Respect Education and Always Climb Higher) is a program funded by the Police Athletic League.  Through this program, Sensei Figgiani teaches character education, leadership skills, and nonviolent conflict resolution to high school students in Suffolk County, New York.  His rapport with the students has enabled this program to reach the level of success it currently has.  Due to the success of this program, it has now expanded into eight different school districts throughout Suffolk County.  The R.E.A.C.H. Program was publicly recognized on national and local television as well as the news media and local radio.  Federal, State, and local politicians have been giving this program great reviews and continue to fund it to the present day.

In 2012, Sensei Figgiani was awarded the National PAL Mentoring Service Award by the Suffolk County Police Athletic League Board of Directors, for his work with children in the community.

In addition to being an 8th dan in Shorin Ryu, Sensei Figgiani also holds the rank of Nidan in Judo under the United States Judo Association.  A Nidan in Koryu Uchinadi Kenpo-jutsu under the direction of Patrick McCarthy.  In 2010, Sensei Figgiani was recognized by the International Ryukyu Karate Research Society as their Instructor of the Year.  He also holds a Shodan in Ryushin Shouchi-ryu – Iaido.

Sensei Figgiani has trained and studied with some of the top instructors in the martial arts which include:

Sensei Figgiani is the technical advisor and a member of the Executive Board of Directors for the Japan Shotokan Karate Association-Pan Am.  He is also the technical director for the Okinawan Karatedo International Union of Karatedo Organization.  Sensei Figgiani is also a graduate of the Long Island University Karate Instructor Certification Program which was headed by Professor Milorad V. Stricevic, M.D.

ABOUT THE SRKDI FOUNDER AND PRESIDENT 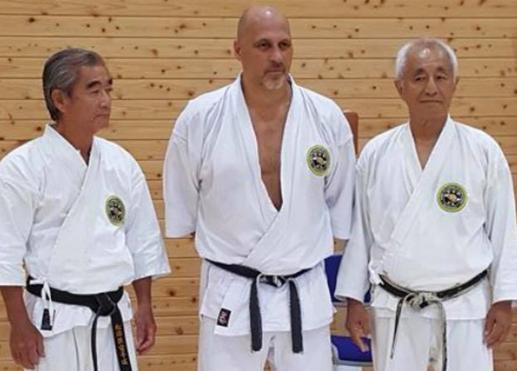