Teaching in the Tokashiki Dojo

In 1958 Tamaki Sensei moved to mainland Japan where he continued his training under Shukumine Gensei until returning to Okinawa in 1961. At that time, Tamaki Sensei resumed his training at the Nagamine Dojo and began traveling to perform seminars around the world. He traveled to Hawaii and San Fransisco with Nagamine Sensei in 1978 and to New York in 1993 and 1994. He traveled to Argentina, also, in 1994 and to Ohio in 1996. In 1997, he visited Canada with Kensei Taba and Takayoshi Nagamine.

In 1988, Shoshin Nagamine graded Tamaki Sensei to Nanadan. Then, in 1997 Tamaki Sensei was appointed to the position of Chief Director of Shoshin Nagamine’s Matsubayashi-Ryu organization. He remained in the position of Chief Director until 2000, when he became a founding member of Shogen-Ryu and appointed Vice-President by Kensei Taba Sensei. Tamaki Sensei was promoted by Taba Sensei to the rank of Hanshi, Kyudan in Shogen-Ryu Karate-Do in 2001.

In 2014 he was selected as President of the newly formed International Shogen-Ryu Karate-Do Kyokai. Tamaki says that he cannot remember exactly when he met Kensei Taba Sensei, because he feels that Taba Sensei was present most of his life. Taba Sensei greatly influenced Tamaki Sensei’s training, deepening his understanding of karate principles and further developing his application of body dynamics in kata and power in kihon.

Tamaki Sensei claims that it is best to train in Karate for a life-time without taking breaks. If you manage that, you will gain confidence and know that there is nothing in life worth fearing. He feels an obligation to teach the true essence of Okinawan karate to the next generation, without holding anything back. In Karate-Do, it is always important to learn techniques before all else. 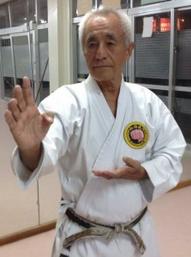 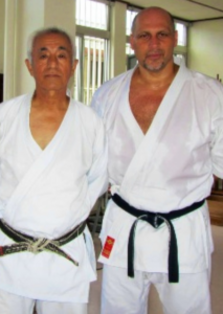 In August 2015, Sensei Takeshi Tamaki became the official Technical Director of Shorin Ryu Karatedo International. Tamaki Sensei brings amazing skills, knowledge, and history to the organization, as he is the most senior student to come out of the Nagamine Dojo.

Tamaki Sensei was born on September 12, 1940, in the Philippines while his family was in exile during World War II. He moved to Okinawa in 1946 after the war, and in 1955, at the age of 15, he started training in Karate under Shoshin Nagamine, the founder of Matsubayashi-Ryu. He began training because he felt that it was the best way to become strong.